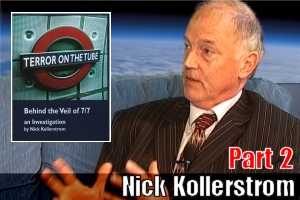 Right click, Save as
In this second of two interviews Nick explains more of the blatant lies and holes in the official story. At the 7/7 inquest diagrams of the train carriages which blew up were produced. These diagrams show positions of each person in the carriage. Nick explains some of the impossibilities of the official narrative based on these diagrams. Also discussed is the disgraceful treatment Nick was given by the BBC when they duped him under false pretenses into taking part in the propoganda film "7/7 Conspiracy Files". All in all once you consider the evidence discussed in these two interviews one has to conclude that we live in a country which has a totally corrupt system of justice, which is controlled by an elite who also planned the bombings.
Details of Nicks book >>